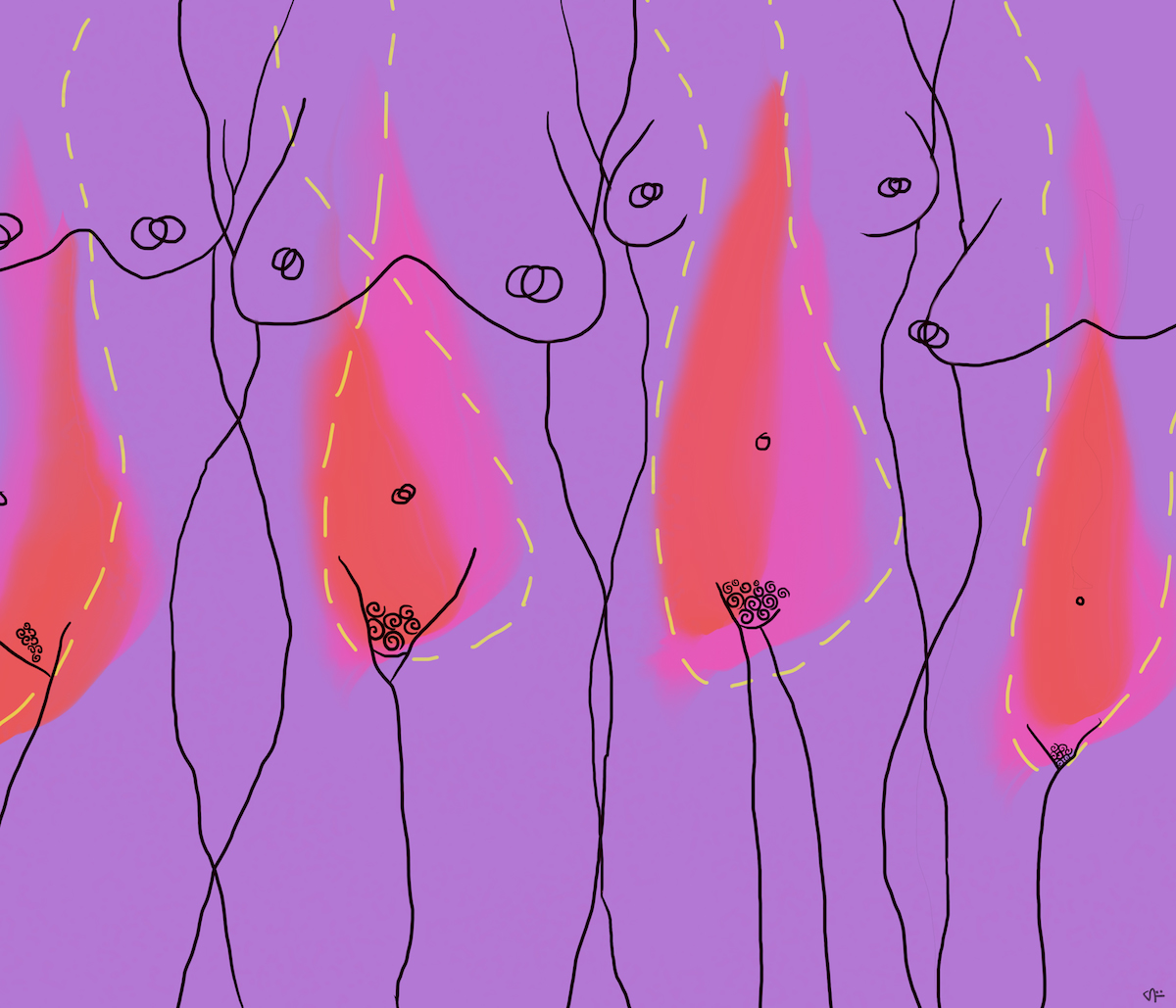 For the last five months I’ve been experiencing a pain in my wrist. It would come and go, at times making me flinch, other times being completely overwhelming. I put it down to writing a lot, cycling all the time, or sleeping on it.

Only when it ached day and night did I take time off work to go to a doctor. After an MRI and a ten minute consultation, I was told repeatedly that the little sac of fluid that had appeared around my wrist bone was “not causing any pain”. I kept nodding along with the doctor, because they were the healthcare professional. They must have known more about my pain than me. Afterwards I was confused. How did the doctor know the pain I was feeling in my own body?

There is a gender bias in how patients are treated. Men wait for an average of 49 minutes before they are treated for abdominal pain, whereas women wait for 65 minutes for the exact same symptoms. It has been reported that period pain is as painful as a heart attack or labour, and yet there is very little research being done on how to treat it, and there is no such thing as a day off work for menstrual cramps.

Female pain has been ignored forever. We are thought of as over-dramatic and indulgent. The word hysteria is actually a greek word for uterus, and was a medical diagnosis used until the 50’s to describe women who were faint, nervous or troublesome. Women are said to complain more than men; we are told we are not accurate reporters of our pain; because men are more phlegmatic, when they do complain of pain it is taken more seriously.

One woman I spoke to suffered with glandular fever for two years before being diagnosed. She was coughing up yellow pus, her lymph nodes were swollen and she had an asthma attack after her throat closed up. In the two years that she visited doctors, she was given ibuprofen and told it was probably just her hormones. Before she was finally diagnosed and admitted to hospital, she ended up losing her job. A male friend of hers who had the exact same symptoms was admitted to hospital almost immediately.

Similarly, I spoke to a student nurse who told me that a male patient on her ward was diagnosed with a broken back within a day. A female patient was in pain for two weeks, being forced to stand up and get out of bed everyday, before the healthcare professionals finally realised she had the same problem. A broken back.

A study from the University of Maryland, The Girl Who Cried Pain, found that women are “more likely to be treated less aggressively in their initial encounters with the health-care system until they ‘prove they are as sick as male patients’”. After speaking with over twenty women, it seems that although the results of this study were from 2002, not much has changed.

Women who have uteruses experience varying levels of pain every single month for a large part of their lives. We know our bodies, we can understand our pain. But when female pain caused by menstrual cramps are a medical concern, we are not always listened to.

Endometriosis is a condition where the uterus lining begins to grow outside of the uterus. It can grow on the ovaries, the fallopian tubes, or the outer walls of the uterus. Sometimes it even grows on other parts of the body. Symptoms range from painful cramps and bleeding during sex to infertility and pain when peeing. It is estimated that 176 million women live with endometriosis across the world, but it takes on average 10 years for it to be correctly diagnosed.

Laura, who lives in the UK, began seeking help from healthcare professionals at the age of 11 when her periods began. Her pain was dismissed at school, and it subsequently took 10 ambulance calls after fainting episodes before she was finally diagnosed by a specialist with endometriosis at the age of 25.

It took Laura going to the doctor twice a month for three months before she was referred to a specialist and received a diagnosis. After a decade ordeal and finally getting treatment for endometriosis, Laura was still in extreme pain, so she had further tests done, at which point a nurse discovered that Laura had a septate uterus. The nurse who gave her the prognosis was shocked it hadn’t been found before. Laura still struggles to be taken seriously by doctors, despite finally having a name for her pain.

With such a huge number of women suffering from a named condition, why does it take such a long time to diagnose endometriosis? Well, it manifests differently from woman to woman, and it has a diverse set of symptoms. Women see an average of eight doctors before they are diagnosed, meaning they have to convince at least eight people that their pain is real before they will have every avenue explored and their condition confirmed. Laparoscopic surgery is the only way to confirm an endometriosis diagnosis, and is often an expensive and inaccessible choice for a lot of patients. However, education surrounding endometriosis is increasing and awareness is one of the greatest tools we have in aiding diagnosis.

When being a woman is a reason to have your pain taken less seriously, being a black/overweight/disabled/trans woman is even harder. In 2016, a study was conducted and found that medical students who had wrong opinions about the biological differences between black and white patients, rated the pain of black patients in mock cases as lower. In another study, black patients are shown to be about half as likely to be prescribed opioid medicines in the emergency department than white patients. A personal essay by Asa Todd, a black woman suffering from depression, highlighted the feeling of racial stereotypes surrounding mental illness: “Professionals often assumed I had no education, despite my Bachelors degree. It was assumed my father wasn’t in my life, despite him waiting for me in the waiting room. After a suicide attempt when I purposely overdosed on my anti anxiety medication, I was labelled a drug addict and a pill seeker”.

A lot of the women I spoke to had good experiences with healthcare professionals. I know lots of doctors myself and this is in no way meant to demonise the hard work that nurses and doctors do. The problems are more deeply rooted than pointing fingers at doctors with bad bedside manner and telling them that they need sensitivity training. The history of ignoring female pain needs to be unpicked at a societal level. We need to look at the language we use when telling children to stop crying, when we tell young girls that PE (Physical education) will help their period cramps, when we dismiss very real pain as heartburn, or give women sweating in agony a paracetamol. As women, we should feel safe in the hands of medical professionals, not told that all women have pain, or made to feel like we’re wasting their time.
–
Original Artwork by Sille Tødten for YEOJA Mag