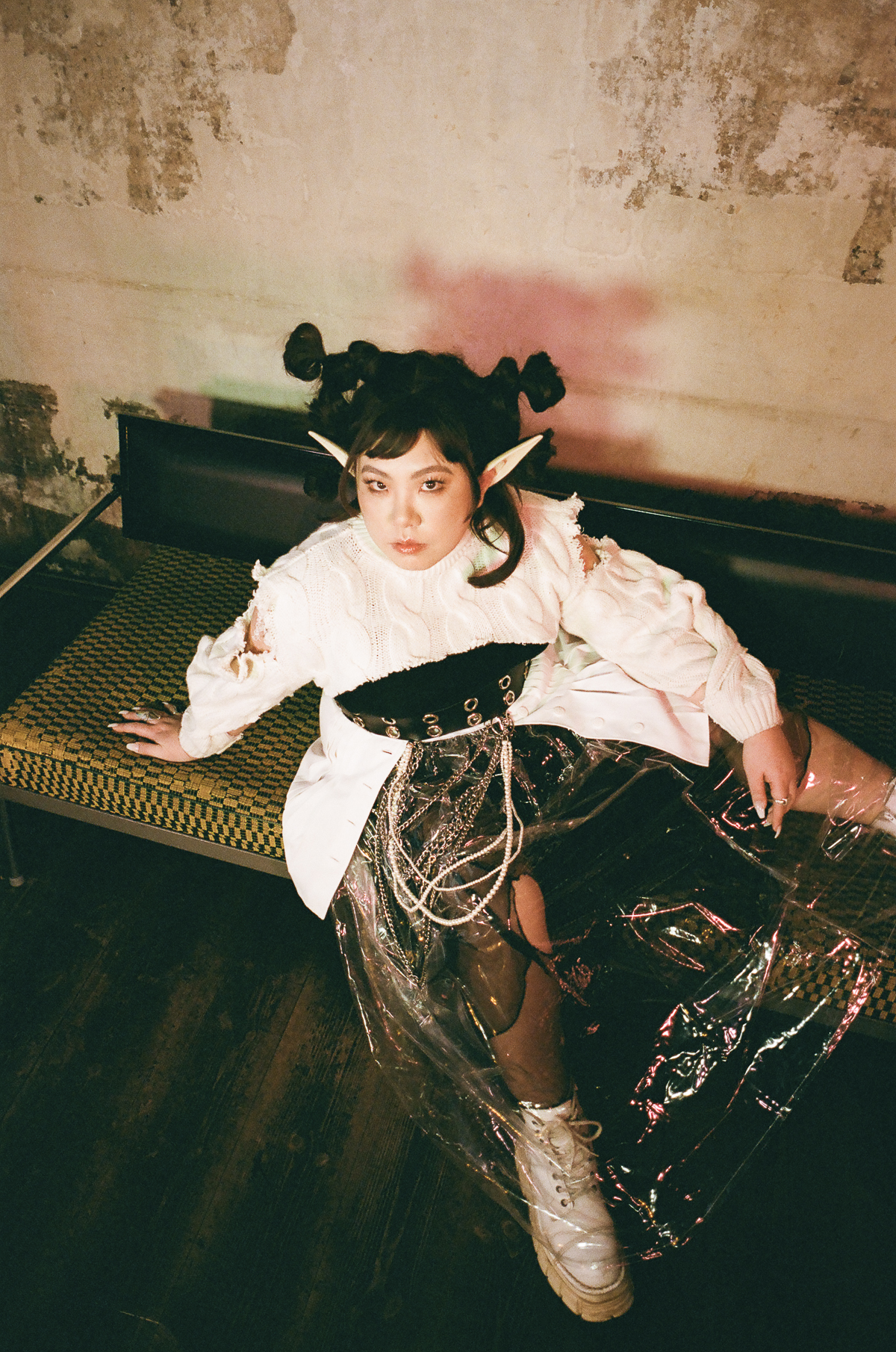 An interview with the Australian Berlin-based vocalist, songwriter, and music producer
19 April 2022

Her aim as an artist is to produce work that is exploratory, authentically expresses her ideas, and emotionally resonates. Outside of her own production work, she has also been involved in the creation of artistic collectives and multi-disciplinary arts events. We sat down with Roz to chat about her sound, upcoming projects, and how her personal experiences with anti-asian hate has shaped her songwriting and music:

Roz will also be performing ‘Awakening’ on livestream on Saturday the 23rd of April at 20:00pm (GMT+2). You can view the livestream on You Tube, or Roz’s website here.

Hey Roz! We hear that your first livestream performance is happening in late March. What has the experience leading up to this date been like so far?
Roz: A lot of work that’s been going on behind the scenes. I’ve learnt so much and I’m really excited to bring my vision to life. I’ve started thinking about how I wanted to perform ‘Awakening’ after the album’s release in June 2021. For me, it was important to deliver something that tread new territory and truly excited me. I’ve long been interested in digital spaces as performance platforms, which prompted the idea of creating a dynamic livestream concert with high production value. I’ve teamed up with a Berlin-based events company, Intheory, who design high quality livestreams. They are the kindest people with amazing ideas.

I’m also working closely again with music producer Andrew Hockey to adapt my music for live performances. Recently, local Ikebana and Floral Designer, Han Le Han, has come on board to assist with stage design. I can’t do this alone. I’m just really grateful for everyone’s support so far – including support from the Gesellschaft zur Verwertung von Leistungsschutzrechten (GVL) and the Neustart Kultur scholarship program.

You’ve mentioned your interest in incorporating other artistic disciplines into your performances – most notably dance/movement/corporal expression. How does being able to express yourself simultaneously through both sound and movement for an audience change both the way in which you get to interact with your audience and the way in which you get to interact with your own music and your own consciousness?
Roz: As a performer I’m always striving to form a deeper connection with my music. I’ve long been comfortable with my voice, but experimenting with movement allows me to explore a different aspect of my songs. It also opens up new ways of communicating or forming a dialogue with my audience. Magic happens when you open up and allow the audience into your word. I want my audience to feel my presence and energy, and know I’m deeply committed to the music and lyrics I’m singing. It’s a high bar but that’s the goal.

As we come closer to March, we are nearing the one year anniversary of the Atlanta Spa Shootings in which 6 Asian women were killed in a racist and xenophobic attack amongst the backdrop of the general global rise in anti-Asian violence exacerbated by the Covid-19 Pandemic. Your song, Three Stops was written as your way of processing the trauma of racism. Can you walk us through what the process has been like from writing the song to releasing it out into the world?
Roz: ‘Awakening’ is a collection of songs that reflect the time we’re in. In this period of upheaval I’m looking at myself in the mirror and asking: who am I and who do I want to be? The song was a vehicle to speak my truth. I should say I was born in Australia but my family were immigrants of Chinese descent. During the first year of the pandemic, it was difficult reconciling my self-image of being a confident and grown woman who moved to Berlin on her own to this person riddled with anxiety about making short unaccompanied trips on public transport.

The threat of hostility or even violence, brought back childhood memories of walking to my primary school seeing “Asians Out” graffitied on the wall and not understanding why this hatred was being directed at me. The secondary trauma is that we are made to feel ashamed or humiliated by bringing it up or having our feelings dismissed because it makes others feel uncomfortable. Three Stops is lyrically dark but the melody is catchy and memorable. The music production reflects the craziness bubbling inside and spilling out of me.

What does it feel like for you when you hear ‘Three Stops’ now?
Roz: I’m just proud and unapologetic about putting it out there. I feel self-empowered when I sing it. The upcoming livestream will be the first time I perform it live.

Do you think you will carry the themes of ‘Three Stops’ into your future music as well?
Roz: There’s usually an element of trying to understand who I am in the world that informs my songwriting. I’ll have to see what emerges from that… so the answer is maybe.

You describe yourself as an artist who creates avant-pop which is certainly reflected in your mix of ambient sounds, glitchy effects, vocals, and lofi samples. What is it about this genre that resonates with you so much?
Roz: I describe my music as Avant-pop because my musical approach is to blend pop music structures and catchy hook sensibilities with unconventional and experimental sounds.

Elements of witch house can be found in ‘Enough’. Three Stops gets quite dubby. And then there are tracks like Lullaby which would fit right at home in a contemporary art exhibition. Your influences are pulled from genres and artists that both overlap and seemingly have little to do with each other and yet there is a cohesiveness to the overall sound that you have developed. Has this been an active decision on your part or an organic and natural progression for you as an artist?
Roz: What genre a track belongs to is somewhat of an afterthought for me. My taste for certain sounds has been the culmination of listening to a lot of different musical genres, as well as writing and producing songs for many years. The common thread is my voice. I’ve developed an intuitive style based on what excites me. A dub beat might initially inspire me but then I feel the track needs an organic textual element so I’ll bring in South American percussion. I might feel the clap sounds lackluster so I’ll replace it with a recording of a pair of scissors being closed shut. Then I’ll step back and ask myself, does this make me feel anything?

You co-founded a diverse and inclusive music producer community called, Beat Collective, back in Melbourne. Can you tell us more about the community, if you are still managing it remotely, and if you have ambitions of doing something similar here in Berlin?
Roz: I returned to Melbourne in 2017 after living in London for a couple of years. I rediscovered the electronic music scene there and made some great friends. The feeling was we wanted to initiate events and projects that lifted each other up without being elitist, a clique, or exclusive. It snowballed into synth jams, a live music residency, an online radio show, and more.

Early in my career, whilst trying to make it in the music industry in Australia, I sometimes felt like I was actively fighting against stereotypes as an Asian-Australian woman or justifying why I belonged in that space. So it felt good to now be leading and shaping the values of the music community. It became too difficult for me to manage remotely. Happy to say it continues on though and is being led by a wonderful producer, Tiarna Pepall. Friends and I created a couple of successful music producer workshops last year under the collective; 1DWOH: one day without humans. We’re on pause now because of our own projects but it’s been on my mind.

We heard that in February you took part in the APRA SongHubs songwriting camp in Sweden. How exciting! Can you tell us a bit more about the camp and why you wanted to take part?
Roz: APRA is a royalties collecting society in Australia and SongHubs is their initiative. They partnered up with Future Echoes Festival for the camp to take place in Norrköping, Sweden. I spent a week in February doing collaborative songwriting sessions with artists, producers and songwriters from Australia, Sweden, the UK, the US and Belgium. The idea was not only to make songs that might potentially be released one day but also to build friendships that extend beyond the camp.

It’s been an ambition of mine to visit Sweden to drink the water and try to understand why so much amazing music comes from there. Acts like Robyn, the Knife, and producer Max Martin have been huge influences on me. So that’s why I initially applied and loved the idea of a focused period to work exclusively with others on music. I was over the moon when I was chosen to take part. It was a fruitful and intense week sitting in as a songwriter for dance-pop tunes to being a producer for a rapper. It’s been a while since I’ve been that social or met so many new people at once due to the pandemic. It’s something I’m still adjusting to as we emerge from it. Overall it was an incredibly rewarding and fun experience. I would do it again in a heartbeat.

Lastly, what exciting things are in store for you in 2022?
Roz: I feel like things are gaining momentum for me and the best thing to do is to focus on writing new music as well as find the right opportunities to showcase what I do.
_