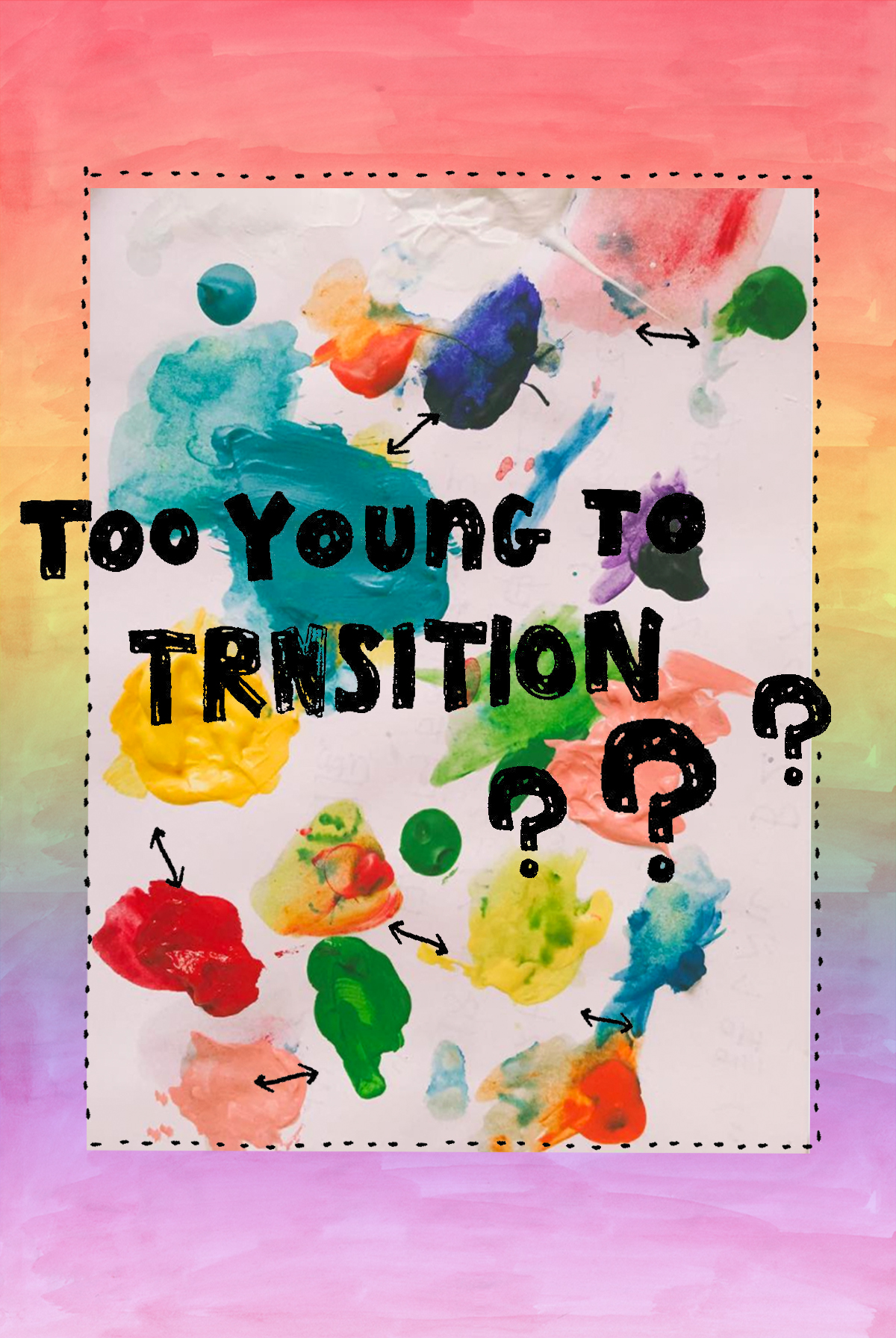 Too Young to Transition?

During the last few years or so, there has been a lot more awareness of transgender people and focus on trans issues. While a step in the right direction has been made in terms of acceptance and access to medical treatment, it is apparent that the debate continues about when it should happen, and when it is “too early”, to transition.

Different countries have their own laws about when it is acceptable to undergo the various stages of treatment during gender transition. In the UK, legal name changes and hormone replacement therapies aren’t allowed until you’re 16, though you can go on hormone blockers earlier. Any kind of surgery can only be undertaken once you reach the age of 18. However, in the USA, some doctors have been giving children hormone replacements as young as 12 or 13, and some teenagers have top surgery as young as 16, providing parental consent is given.

With all these different rules in different places, with parents and other people having different ideas about what’s best for children, it has sparked a debate as to when it’s too early to start gender transition. When do you really “know” what your gender is?

Some children as young as two decide that they’re a different gender from what they were assigned at birth, many of those with understanding and accepting parents start to undergo their gender transitions soon after deciding – whether that be dressing outwardly as their desired gender or changing their names and the pronouns used then just living their life from there. Until puberty starts, not much else can be done, but some people still have issues even with name and pronoun changes this young, with many saying that children may change their minds, and don’t have a very good idea of who they are and what they want.

Arguably, this can be true: children don’t necessarily know who they are and what they want. As a two-year-old my mum asked my what I wanted to be when I grew up and I said “A man, so that I can laze around all day and have a wife or lots of kids to look after me”. Although I would love to laze around and have someone to look after me, I’m not quite so keen on the man thing, and while I made a more realistic choice at the time, I did have a friend who wanted to be an elephant when he grew up, so that’s something. Kids do say these things and don’t always have a grasp on the implications, or what they’ll want in the future. However, if I had said at age two “I want to be a man, use ‘he’ and call me Isaac”, I’m pretty sure that they would have – and I probably would’ve changed my mind, because I don’t identify as a man, so I’d have gone back to being ‘she’ and there would be no issue.

Yes, kids change their minds. Yes, kids don’t always have an idea of exactly what they want later in life. Yes, Kids don’t understand the concept of gender as a construct and all that comes with it – heck, most adults don’t! I’m not saying that as soon as a child goes “I’m Luke, not Lucy” you immediately go and change everything their name, but if they do decide that, and then go back on it, what is the harm?  If they are adamant and want to change their name, pronouns, and everything else, but people around them say “No, you’re not ready to know that yet”, you just have years and years of not letting that child be themselves. Kids should be allowed to explore their gender and their identities, even if that exploration means change.

The next stage in a young person’s gender transition tends to come with hormone blockers, and then hormone replacement therapy. Hormone blockers stop your body from producing any puberty inducing hormones while you’re taking them, meaning they can stop a teenager going through the wrong puberty for them. Hormone replacement then gives that teenager the right hormones for their gender and means they will then through the puberty they want to have. Hormone blockers – in the UK at least – are generally given to children between the ages of 11 and 16, before they’re allowed to take hormone replacement, but the youngest person who’s been prescribed them was 10 years old (in 2016). This has been quite controversial as it’s seen by a lot of people as altering a child’s body before they’re really old enough to decide what they want for themselves. The law in the UK is that children can only decide what is best for themselves medically at the age of 16, but realistically hormone blockers only temporarily halt puberty, and will only be given to a child when doctors deem them physically and psychologically ready. A child can be taken off them at any time, and then go through the puberty that fits with their assigned gender.

However, not taking hormone blockers can have a detrimental impact on young transgender people. Without them, they can end up going through puberty that doesn’t fit their gender. It can lead to extreme body dysmorphia, anxiety disorders, and depression. People often think about what happens if they go through the steps of gender transition and then change their mind, but do not fully consider the consequences of not having access to appropriate medical treatments before a body changes, just because someone is deemed “too young”. Puberty is difficult enough as it is, but it is so much harder when you’re going through puberty that doesn’t fit you. With so many transgender adults agreeing that if they’d had access to this treatment at a young age, one could argue access to hormone blockers would have relieved them of so much anguish and hate around their bodies.

The suicide rate among young transgender people is extremely high. Isn’t it better that they’re listened to, allowed to change, and then change their mind later (if they want to), rather than to refuse them access to treatment and risk a young transgender person becoming yet another statistic in trans suicide?

Access to surgery also raises very similar arguments. Ultimately, if a transgender person wants access to treatment, whether they’re 4 or 104, they should be given it. I’m not saying we should give a child hormone replacers at age 10 and push them through puberty, or give genital reassignment surgery to a 14 year old, but they should not be forced through changes that are going to seriously affect their mental and physical health. Let them be themselves.

Let kids go by the names and pronouns that they want to, let people dress and express their gender how they want to, and give young transgender people access to the treatment they need before it’s too late.
–