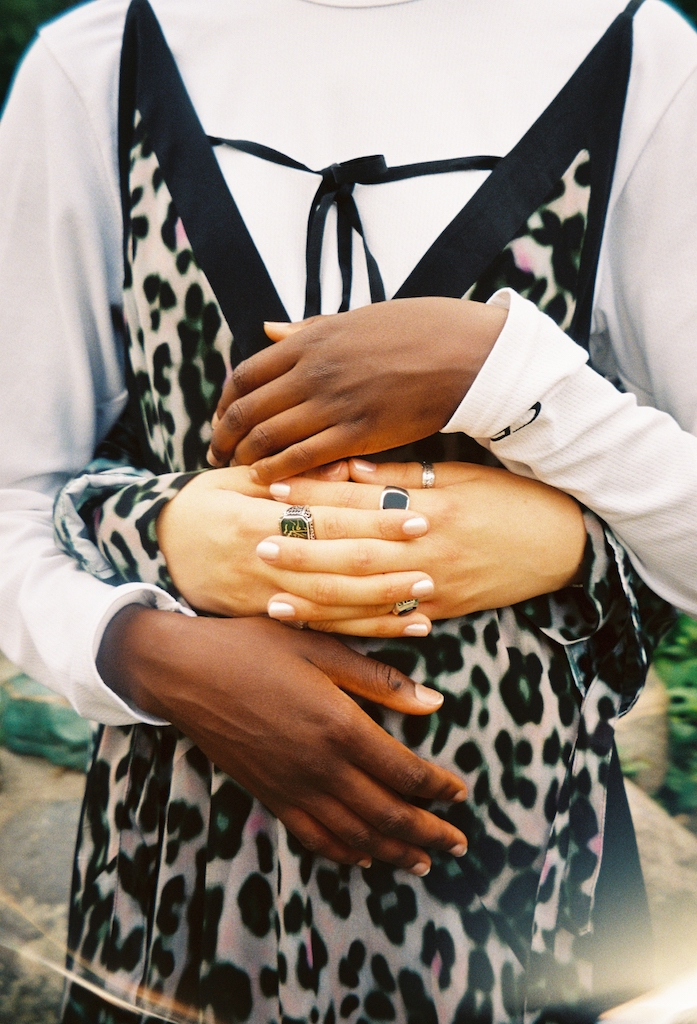 Joanna Legid is a photographer and co-founder of the inclusive creative platform HEART WORK. After moving from Rwanda to West Africa to the South of Germany in her youth, Joanna studied politics in Paris, worked in Hamburg for two years as a writer for BLONDE Magazine, and ultimately relocated to Berlin in 2009, where she's lived since. I spoke to Joanna in Neukölln to learn more about her photography and her identity as an artist.

Authentic. That’s what the ‘Legid’ stands for in the name because it’s not my last name. It’s a joke actually. A friend of my used to say legit and he used to describe my photos as legit. I remember it was the first time I heard this word, and I would try to use it myself when I speak English, but I would pronounce it with a French accent. And when I was looking for an artist name, the friend told me, use legit like you pronounce it and use it as your artist name.

What is your biggest creative influence?

Berlin. It’s my playground. Not just Berlin, actually, but everywhere I go because I shoot mostly outside. I don’t really shoot in a studio and I never plan on ‘I need this light, blah blah blah.’ When I organize a shoot, I’m just thinking of a place I like or a place I want to shoot because I’ve never been there: in a park, or in the streets, or a house, whatever. And then I just go with it.

Definitely my friend Anna. She used to work with me on Blonde Magazine. She does the styling, and we do production a lot together. Since we’ve starting working together, we’ve helped each other. We grow together.

You shoot both fashion and portrait photography. Do you prefer one field over the other?

I love both, but the personal work is intimate and more simple. I started off just taking pictures of my friends and the things that surround me. They were not planned. It was more just in the moment, taking portraits of people I knew. I think the images I create are just the moments. It’s not me as a photographer that has a talent. It’s a gift people give me as well because they’re authentic when they’re with me.

Editorial work is the place for work. It’s fun. When I have a shoot, I feel like a kid that can go out and play. It’s more about creating your ideas; creating an illusion, basically. So one is more reality and one is more creating a fake world, which is fun to create, but I prefer reality.

How do you maintain the quality of intimacy when shooting commercially?

My deal is when I do jobs, I’m still the one that chooses my models. Intimacy is really important in my work. When I do portraits, it’s mostly people I’m friends with or I know. And when I do work, even when I don’t really know them (the model), I choose them because I sense a connection. The fact that I’m the one that chooses the people I want to have in front of my camera, it just helps a lot. Even if it’s in the studio, even if it’s with clothes I don’t like, that I chose my counterpart, it’s both of us doing the work. As a photographer, it’s giving and taking. I’m not the only one that creates the images.

What has been your favorite brand to shoot for?

I do a lot of work for magazines, so I would say Refinery29 was a good working partner because they gave us a lot of freedom. They were like ‘ok, we have this topic,’ and Anna and I could do it how we wanted to. They didn’t try to put us in a box or change our aesthetics.

The medium of analogue photography seems to be dying out as people opt to use digital cameras for their convenience. Why do you choose to shoot analogue?

To be honest, at the beginning it was more out of convenience for me. I had an analogue camera, so that’s how I started. Also, I really really like the film quality. I like what comes out of it. I like the process of having to wait and then you get the pictures and you’re like ‘wow, that’s what they look like.’ The surprise is part of the whole process.

But I do both now. Both have positive and negative sides. I do analogue more because my rule is not to edit images. It is easier to make things look good with an analogue camera because the film erases imperfections. The more I was working commercial, the more I had clients that wanted digital. To be honest, at every shoot I do both, and in the end, they always take analogue.

How do your Rwandan roots influence your work?

Completely. All my work is about it. I don’t know if it’s selfish or not, or just me reflecting myself through my work. It’s a therapy, for sure. I shoot mostly women, not men. A lot of women of color. And not because I don’t want to shoot men, but because of the intimacy, to go back to that. Because even when I don’t know them, I feel a connection.

I grew up in Africa and my school was an international school. I had friends from all over the world. My best friend was from Lebanon. I had a Dutch friend, a Haitian friend, I had a French friend, mixed friends. We never thought about identity or that we look different. It was just normal.

Some people criticize me and ask why I don’t just focus on women of color. I’m a brown girl so I could shoot brown girls only, because I can easily relate to them and identity with that part of me. But that’s not the only thing I relate to. I’ve always had this Utopian view of the world in my head. We are all different, but we are all the same at the same time, and that’s what I try to show through my work. Especially for women. We’re all different, but we have the same thoughts.

You previously wrote for Blonde Magazine and are now freelance. What topics does your writing focus on?

For Blonde, my topics were, same thing like photography, about women. I try to understand myself through other women, so writing is a process, even more than photography, to approach people. I’m shy. With my camera or with my pen, I can approach people and ask them the questions I don’t have the guts to ask in a normal conversation.

I wrote about abortion, I wrote about periods, I wrote about female circumcision. Also, with interviews, I’m rarely inspired to write about a topic without interviewing other people. It’s more like I see this person or I read about someone and I think that they probably have so much to say and I interview them. That’s the click that makes me want to write. I want to tell different stories.

What has been your favorite photo series, both in terms of the process of shooting and the final product?

I actually know exactly which one because I just shot it in August. It’s Anna’s best friend. I didn’t know her. Her dad is from Tanzania, her mom is from Romania, and she grew up in Germany. Her mom has an old castle in Romania and she’s lived there since 2000. It’s amazing. It’s a dirty castle with animals walking everywhere because it’s a farm. It’s in the middle of nowhere.

Alice, this woman, is a singer in real life. She’s this really glamorous person. It’s quite funny because you get to know her and she’s quite down-to-earth. We went to Romania for a week and decided to shoot her and to do an interview with her for our platform. It was about identity.

It was the first time that we did something for our platform. There was no brand involved, no magazine. We created a story that was our editorial. We did it how we wanted it to look like. We had a whole week to shoot, so we’d chill the whole day and then we’d shoot for three hours. For seven days. We had so many different looks in the end, so many different images.

I loved it because Romania reminded me a bit of Africa because it’s this no-rule country where it’s okay to walk with a pig on the streets. People are still a bit crazy there and it’s good. It’s healthy to be crazy. I went there and I just felt at home.

Do you have any advice for young female photographers looking to break into the industry?

I would tell them to just keep photographing what they like and trying out. If you’re an artist, just be an artist, and the industry will follow. Stick to your style.

This interview has been edited for clarity and brevity.