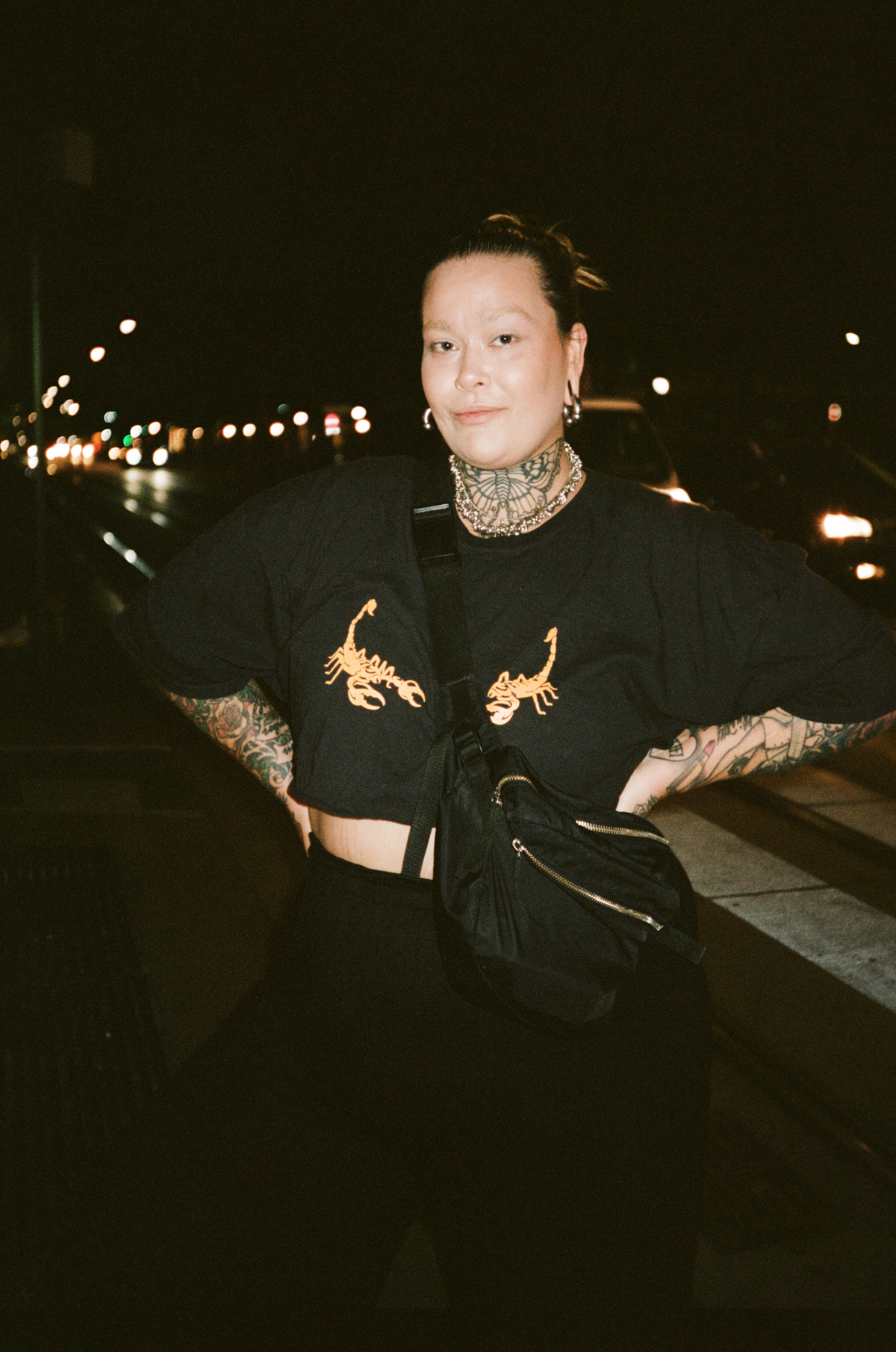 Interview with the model, powerlifter and fat liberation activist
5 October 2021

YEOJA chatted with activist, model and powerlifter Anna Stomosis about navigating the fashion and social media world as a fat model, the so called body positivity movement and how thin folx can be better allies in the fight for fat acceptance & liberation.

Hey Anna! Could you introduce yourself to our readers?
Anna: I‘m a thirty-three year old demifemale from Vienna, and I create content on Instagram where I focus on topics such as fat liberation and battling anti-fatness.

How did you get to where you are now? What came first – fashion, powerlifting, or modeling?
Anna: Fashion. As I was excluded from fashion because of my body size for the majority of my adult life, I’ve been sharing fashion on my Instagram account @missannastomosis since 2015. It started simply from me trying to find cute clothes to wear and then deciding to post them on Instagram. From this, my account grew continuously, and I started modelling for various brands on my Instagram account. However, I never really considered myself a “real” model until 2019, when Crumb Agency, who now represent me, asked if I had an agent.  I started powerlifting in 2016, mainly because I wanted to try lifting heavy stuff. I loved it and continued and decided I could be a representation for fat bodies moving, which led to some interest at the time from local media. Still, it took a few more years for media outlets to stop viewing my story as: “Anna lifts weight like a man” (which really was the title of a TV segment about me).

How do you navigate working in an industry that neglects fat bodies, especially when working with more mainstream brands?
Anna: It is very much a path with ups and downs. In the beginning I was obsessed with bringing my shapewear with me to feel “safer” in my body. Over time, I tackled the aspects that made me feel disrespected and insecure at shoots. I really had to learn to speak up and challenge what was sometimes said or done to me. I think the only way to navigate [the fashion industry] is questioning the status quo and addressing problematic language and behaviour towards fat models. Change needs to happen. We are still so far from real inclusivity, as all that has really been created is a [separate] new beauty standard for “thick” folx.

Does having a large audience on Instagram ever make you feel like you have to compromise yourself or your beliefs?
Anna: It did. I have been [creating content on] Instagram for the last six years. I was very much convinced in the beginning that I needed to represent a “good” example of a fat person. And that’s what I did – centering my hourglass body shape, editing my photos heavily, and smoothing every little part of my fat body that could potentially be seen as “disgusting”. However, over the years and through my personal journey I learned that this is not the way to go; I really want to help create change. So, I dropped everything a year ago and cut ties with every collab and with every brand that didn’t align with what I actually want to represent as a creator (hint: it was all of them). At the moment, I’m kind of trying to find my groove and creative spirit again.

Instagram is known for censoring fat bodies. Do you have any experience with this?
Anna: Plenty. I’ve had a lot of posts reported for nudity and sexual activities, just for existing in my fat body in a damn bikini. Instagram (and tbh every social media platform) has a massive problem with censoring certain body types, and topics in general. Political content will never get the engagement a thin white woman in a bikini will receive – and fat bodies are political. Through countless reports by people who simply hate to see us thriving and existing, and being shadowbanned by instagram, it’s a pretty hostile environment for fat folk. It still does feel way better though than TikTok for example. I’ve had to prioritise my mental health by not being on there anymore, as the hate and bullying is out of this world.

What is your opinion on terms like body positivity, fat acceptance, and fat liberation? Which ones do you personally use in your activism?
Anna: BoPo (Body Positivity) is a term and a movement I previously identified with a lot during the early years of my journey. Over time I realised for myself, that this is not the movement that will lead to change on a structural level. It was watered down and basically hijacked by thin white women who squeeze their skinfolds to appear more relatable, while the mainstream decided that this movement was never even for fat people. Terms like BoPo [and their movements] just show that valuing your body will not change a thing for actual fat people who are systematically discriminated against. I am solely using the terms fat acceptance and fat liberation, as it is what I am striving for – freeing all fat people from oppression and discrimation on a structural level.

Conversations about health in relation to body size is a very polarising conversation. What are your thoughts on this?
Anna: I can tell you that it is impossible to tell the health status of a person by simply looking at them. The problem is that even medical professionals and doctors think they can. What really bugs me about this, is that basic human respect is now being denied to fat people because of the assumption that they are inherently unhealthy due to their size. Even if a person is unhealthy, no one (fat or otherwise) has a moral obligation to be healthy and one’s level of health should never determine how or if we value and respect them. Even if a fat person is unhealthy they still deserve to be treated with dignity and respect.  We live in a world where fat people regularly delay seeking medical care out of fear. We also live in a world where a thin person with high blood pressure gets a prescription for medication whereas a fat person with high blood pressure is just prescribed to lose weight. This is highly unethical and medical malpractice, but it’s our reality. Getting treatment according to our body size, instead of for our symptoms, and being neglected in care because of our body size is nothing new for us. Take the H1N1 swine flu a few years back, we now know that fat folx died a lot more frequently than thin people. We also now know that treatment was delayed or not given [to fat folx]. This discrimation kills people.

What do you think about thin influencers/models being part of the body positivity movement?
Anna: I’m here for any person who wants to rid themselves of the diet industry’s grip and beauty standards. The problem is not that thin folx get media coverage for loving their bodies instantly whereas fat people are not afforded the same luxury. The problem is that the same thin people who claim body positivity for themselves are often reproducing anti-fat violence. They are taking up space that is for marginalised people, and not speaking up for the ones who paved the way. The movement is now dominated by thin and socially acceptable people so they can feel less insecure about skinfolds and this leaves a foul taste in my mouth.

How can thin people support fat folx in the body positivity movement?
Anna: Stand up for us. As frustrating as it is, their voices are listened to differently – especially when it comes to fatness. Fat people are already deemed as less educated, lazy, and so on. The world has been taught that fat people are living the absolute worst reality imaginable, so why would they listen to us when we try to tell them it’s not the case? We need thin allies speaking up for us and giving us space where we usually wouldn’t be heard. Whether that is by talking to anti-fat friends, challenging the diet Industry, or fighting against weight stigma.

What projects do you have going on at the moment that you’d like to share with us?
Anna: I’m currently in the process of finding my way. I‘ve intentionally taken time off creating because of personal reasons and also for my mental health. There are some smaller projects with artists in the works, but nothing major (and I’m quite happy about it) as I want to be absolutely aligned with what I do.

Is there anything else you would like to say to our readers?
Anna: Stop the diet talk next to your fat friends, stop asking people if they’ve lost or gained weight, stop commenting on people’s bodies, and stop the you’re so brave “compliments.”