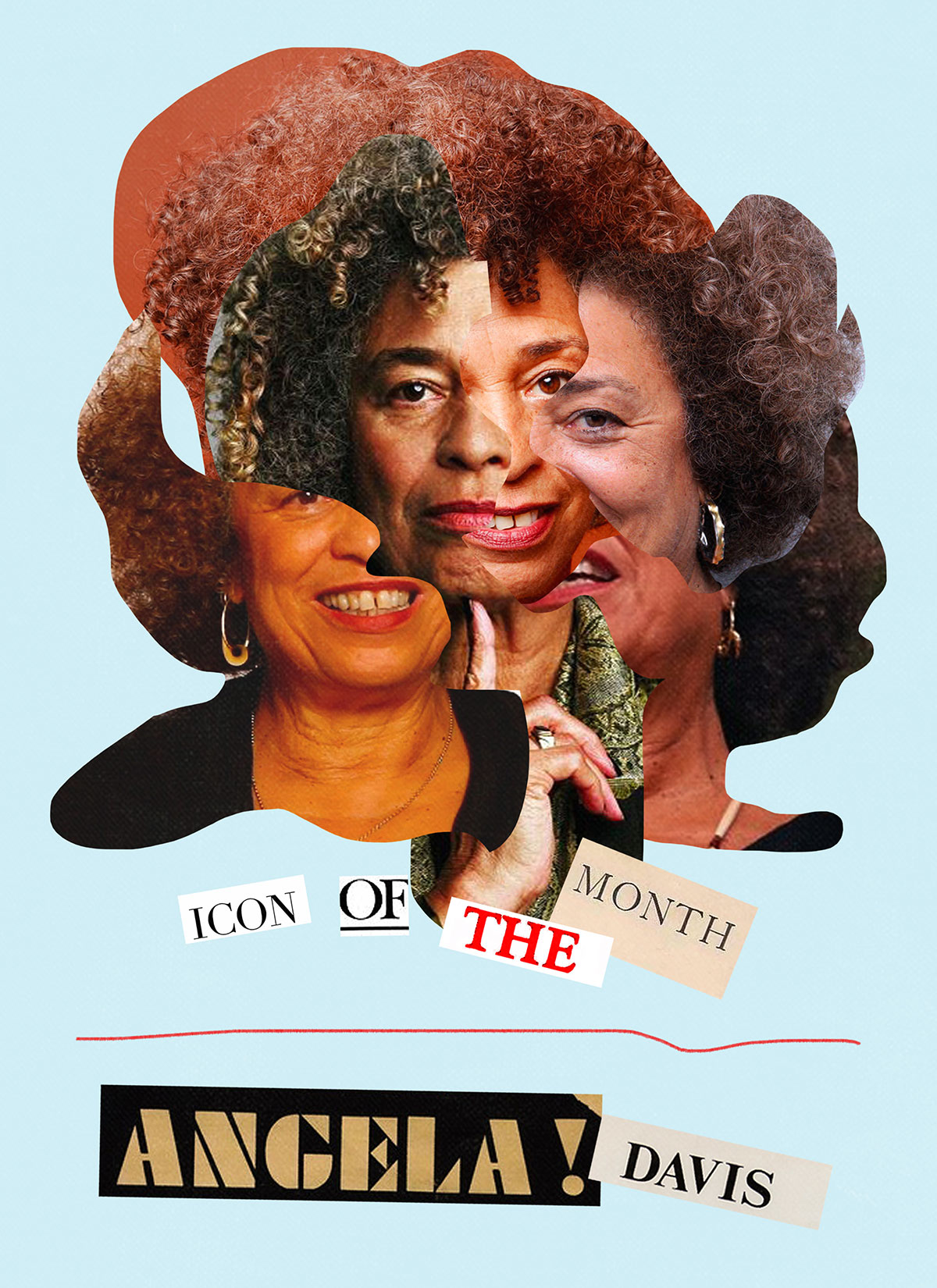 It’s almost impossible to discuss icons without mentioning the legendary Angela Davis. From her involvement in the civil rights movement and Black Panther Party to her present-day discussions on prison abolition, her continued work is inspiring beyond measure.

Born Angela Yvonne Davis in 1944, the Birmingham, Alabama native came face-to-face with racism at a young age. She was raised in the city’s ‘Dynamite Hill’ area; a black, middle-class neighbourhood notorious for bomb attacks at the hands of the Ku Klux Klan. As the daughter of an educator (and National Association for the Advancement of Colored People [NAACP] member), racial pride, racial justice and activism was sure to follow in her early career.

As such, education was pivotal for Davis. Her mother’s involvement with the Communist-leaning Southern Negro Youth Congress, provided a framework for her early activism. The family moved to New York when she was a teenager and in 1961, she was awarded a scholarship to attend Brandeis University in Waltham, Massachusetts. During her studies, the young scholar became acquainted with numerous schools of thought including feminism and communism. (Her involvement in the latter would later lead to her dismissal as Assistant Professor of Philosophy at the University of California, Los Angeles (UCLA)).

In 1963, during her studies, Davis learned of the Alabama Church bombing. The attack, which led to the deaths of four young girls at the 16th Street Baptist Church, struck a chord with her; especially given its location. Moved by its magnitude, Davis spoke on the matter, as seen in Göran Olsson’s 2011 documentary, The Black Power Mixtape 1967 – 1975.

“I grew up in Birmingham, Alabama,” she says. “Some very, very good friends of mine were killed by bombs. Bombs that were planted by racists. I remember, from the time I was very small, I remember the sounds of bombs exploding across the street; our house shaking. I remember our father having to have guns at his disposal at all times, because of the fact that at any moment we might expect to be attacked.”

The event was one of many catalysts for civil rights among African Americans. While some, including Dr. Martin Luther King Jr, called for action with limited violence, Davis’ intentions turned to alternative means. Post-graduation, she officially joined the American Communist party and later relocated to California to complete her Masters.

While living on the West Coast, Davis grew increasingly interested in the burgeoning black power movement and fast became an associate of the Black Panther Party. Inspired by the Soledad Brothers – prisoners George Jackson, Fleeta Drumgo, and John Clutchette – charged with the murder of a white police guard, Davis actively fought against the institutional imprisonment of African American men. Her involvement in their trial (and the death of the county judge) led to her feeling California and becoming a wanted FBI suspect. Upon her return, she campaigned tirelessly for her innocence and was later acquited of all charges.

In 1974, she published Angela Davis: An Autobiography and would follow her account with additional texts including, Women, Race, & Class (1983), Are Prisons Obsolete? (2003), and Freedom Is a Constant Struggle: Ferguson, Palestine, and the Foundations of a Movement (2015). She later resumed a teaching position at San Francisco State University and continued to make public addresses in the United States and Europe.

Never leaving her grassroots work behind, Davis founded Critical Resistance, an organization dedicated to dismantling the prison-industrial complex. Alongside this work, Davis has aired her support for the people of Cuba and in recent years, Palestine. In regards to the latter, the Birmingham Civil Rights Institute (BCRI) rescinded (and re-instated) her Fred Shuttlesworth Human Rights Award.

In a statement, Davis responded with the following:

I later learned that my long-term support of justice for Palestine was at issue. This seemed particularly unfortunate, given that my own freedom was secured – and indeed my life was saved – by a vast international movement. And I have devoted much of my own activism to international solidarity and, specifically, to linking struggles in other parts of the world to U.S. grassroots campaigns against police violence, the prison industrial complex, and racism more broadly.

Davis’ life’s work has been dedicated to serving the marginalised and disenfranchised. Despite attacks against her legacy, she continues to strive forward, remembering those who have helped her along the way. Whether it’s her image as an Afro-clad activist or college professor that you remember most fondly, what remains is that Dr. Davis will always be an icon.

–
Original artwork created by Katia Engell for YEOJA Mag. Be sure to check out our previous ‘Icon of the Month,’ Laverne Cox.